Posted on February 6, 2020 by srilankatwo 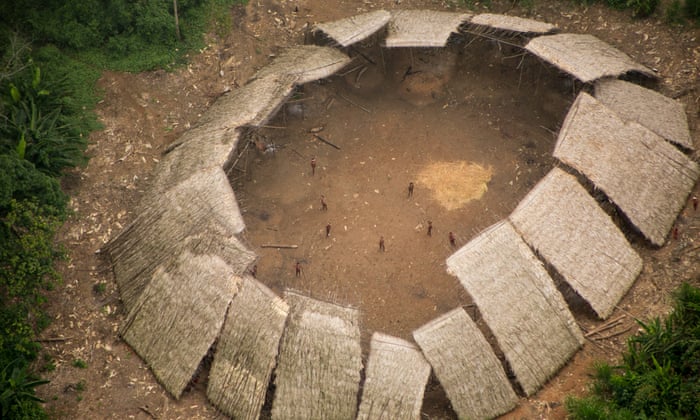 An uncontacted village in the Yanomami indigenous territory in the north of Brazil, close to the Venezuelan border photographed from the air in 2016. Photograph: Guilherme Gnipper Trevisan/Hutukara

Brazil has put a former evangelical missionary in charge of its isolated indigenous tribes, provoking concern among indigenous groups, NGOs, anthropologists and even government officials, who fear the government of the far-right president, Jair Bolsonaro, is overseeing a new push to spread Christianity among Brazil’s indigenous people.

The appointment of Ricardo Lopes Dias, an anthropologist and evangelical pastor, to head the department for isolated and recently contacted tribes at the indigenous agency Funai, was announced on Wednesday.

Dias will have detailed information on 107 isolated tribes, including monitoring and location studies. Brazil has more “voluntarily isolated” tribes – some of whom are believed to have hidden from white society after massacres and epidemics – than any other country.

Victoria Tauli-Corpuz, the UN special rapporteur on the rights of indigenous people, said: “This is a dangerous decision that may have the potential to cause genocide among isolated indigenous people.”
Bolsonaro has frequently made racist remarks about the country’s indigenous people, recently commenting that they were “increasingly becoming human beings just like us”.

Critics say he is bargaining indigenous lives for political support from the powerful evangelical lobby, just as his attacks on environmental agencies have appeased wildcat miners and farmers in the Amazon.

“There are those who see nothing but the greed of land-grabbers, cattle ranchers and mining companies driving Bolsonaro’s anti-indigenous policies. But it’s clear cultural annihilation with religious dividends is also guiding the presidency,” the Folha de S Paulo newspaper said on Tuesday.

Critics said Dias’s appointment threatened the survival of vulnerable isolated groups, which in the past have been decimated by diseases like measles and flu after coming into contact with evangelical missionaries, government employees and outsiders.

The Brazilian Amazon indigenous organisation Coiab warned of “the crimes of genocide and ethnocide that will be committed against our isolated relatives”.

Beto Marubo, an indigenous leader from the Javari Valley reserve, said evangelical missionaries destroy the “cosmological and ethical” belief systems of indigenous people. “The behaviour of missionaries in indigenous communities is as malign as a disease,” he said.

Between 1997 and 2007, Dias worked as a missionary in the same reserve for the controversial group New Tribes Mission, who pledged to convert every last “unreached people group” on earth. The group has since changed its name to Ethnos 360.

“I’ve been in these tribes and at times you can feel this incredible, intense darkness. But you know what I found? No darkness is too dark for God,” CEO Larry Brown says in a video on its website.
In his 2015 dissertation for a social science master’s degree, Dias said he decided as a young man to commit himself to the “cause” of evangelizing among indigenous people.

Speaking to O Globo newspaper last week, he refused to say whether he would change Brazil’s 37-year rule of “no contact” with indigenous people.

“My performance will be technical. I will not promote evangelisation of indigenous people,” he said.
But Brazil’s public defender’s office said such a nomination risked “the mass death of indigenous people from illness resulting from irresponsible contact, or conflicts between religious missions, loggers, wildcat miners, hunters and illegal fishermen”.

A photo made available on 1 February 2011 by Survival International shows members of an uncontacted tribe in the Brazilian Amazon. Photograph: Gleison Miranda/Funai/EPA 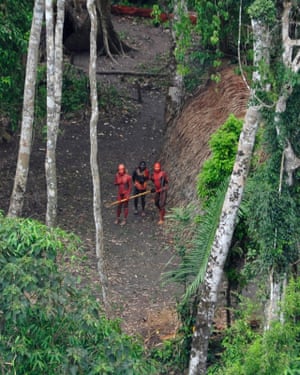 Indigenous experts said the move to allow evangelical missionaries to contact remote tribes has already begun. They allege a missionary group is using a mental health visit to gain access to a remote Amazon tribe they were previously expelled from.

Following an alert from a local Funai official, the federal prosecutor for Amazonas state has written to the head of the government’s indigenous health service (Sesai) demanding details of the mission to visit the remote Suruwaha tribe.

According to the alert, the visit will be led by Sesai’s boss, Silvia Waiãpi – an indigenous woman, army officer and former soap opera actor who campaigned for Bolsonaro.

It also includes two Suruwaha indigenous women who live in an evangelical community in Brasília run by Jocum – the Brazilian arm of international evangelical missionary group Youth With A Mission.

Four psychologists and a Jocum linguist are also in the group.

Federal prosecutors ordered Funai to expel Jocum missionaries from the Suruwaha reserve in 2003.
The latest mission was launched after five Suruwaha killed themselves last year. About 150 people live in the community, where ritual suicides have long been part of the culture. One Swiss study counted up to 12 suicides a year between 1984 and 2018.

Adriana Huber, an anthropologist with the Indigenous Missionary Council – a Catholic NGO – lived with the Suruwaha from 2006 to 2011. She said suicides are part of the cosmology of the tribe, used as a form of conflict resolution, and have happened since the 1930s. Any move by the Brazilian state to treat mental health issues should be negotiated with the tribe, she said, not imposed upon them.