India’s Muslims Are Terrified of Being Deported

India’s Muslims Are Terrified of Being Deported

Many Indians lack the documents needed to prove citizenship—and Muslims are in the firing line. 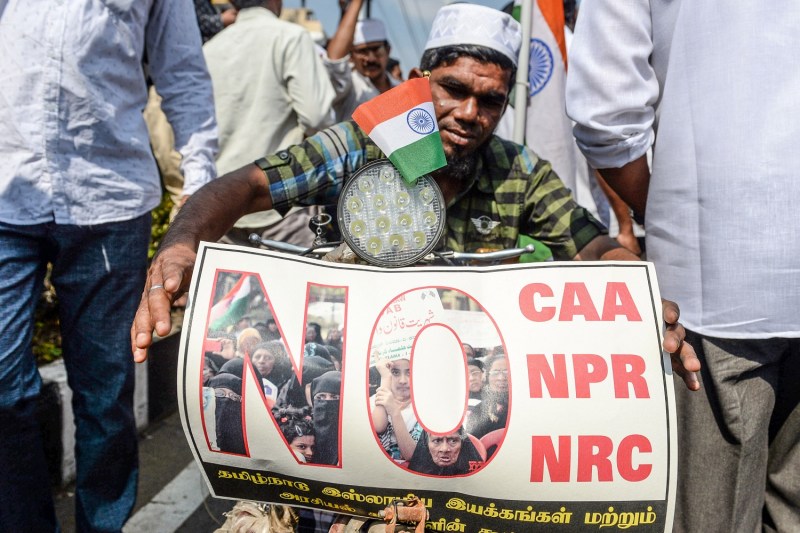 A demonstrator holds a placard during a protest organized by various Muslim organizations and opposition parties against India’s new citizenship law in Chennai on Feb. 19. ARUN SANKAR/AFP VIA GETTY IMAGES


Firoza Bano, 50, sat worried in her home in the northern Indian city of Jaipur. Born in the north Indian state of Rajasthan in 1970, she has barely traveled outside the state—but now she faces the possibility of being kicked out of her home country. The Citizenship Amendment Act (CAA) and the proposed all-India National Register of Citizens (NRC) will require Bano to prove she’s Indian. If she’s unable to produce the requisite documents, she might lose her citizenship and be declared an infiltrator. At best, she might spend months in one of the detention centers being built across the country to house the newly created refugees—at worst, she could be deported to a country she’s never known or be left stateless.

“My mother gave birth to me at home. My birth was never registered, so how do I produce a certificate?” Bano said. “Nor do I have land ownership or tenancy records dating back five decades. Although we’re law-abiding citizens, having lived peacefully in India all our lives, we might be thrown out of the country.”

Last December, India passed the CAA, which provides a route to citizenship to members of six religious minority communities from Pakistan, Bangladesh, and Afghanistan—but not for Muslims. Coupled with the NRC, a supposedly definitive list of Indian citizens, the provision is facing criticism for being anti-Muslim and unconstitutional. A similar list in Assam has already been used to single out Indian-born Muslims for potential deportation. And while members of other faiths now have the shield of the CAA as a route back into Indian citizenship if they’re branded as illegal by the NRC process, Muslims have no such respite.

That’s a big problem. Even today, 38 percent of Indian children under the age of 5 do not have birth certificates.

Other documents can substitute, but they’re also often lacking—especially for older people. The reasons for this are varied—lack of awareness, inaccessible registration centers, and no immediate requirement for these certificates to access social services. Government data shows that 6.8 million births were not registered in India in 2015-2016, and the situation is worse for older residents, who were born when home births were more prevalent in the country.

There’s a gulf between government rhetoric on the NRC and what critics believe—but the record of an increasingly hard-right Hindu nationalist government under the Bharatiya Janata Party (BJP) makes the government’s word seem dubious at best. There has been a systematic scapegoating of Muslims under BJP rule. Human Rights Watch published a report in 2019, observing that the party uses “communal rhetoric” to spur “a violent vigilante campaign,” whereby radical cow protection groups lynched 44 people to death, 36 of them Muslims, between May 2015 and December 2018. Prior to its landslide win in the 2019 elections, the BJP also used religious polarization as a campaigning tool, making promises such as the expedited construction of a temple in place of a demolished mosque in Ayodhya.

After the CAA bill was signed into law, widespread protests erupted across the country, killing 25 people so far and leaving thousands in police detention. The government has downplayed the NRC, stating that it has no plans of conducting the NRC exercise across the country on religious lines.

That comes despite regular rhetoric from the BJP on supposed infiltrators from Muslim countries. In the state of West Bengal, for instance, BJP chief Dilip Ghosh recently stated that the center was committed to “throwing out” 10 million Bangladeshi Muslim “infiltrators” from the state and that those opposing the move were “anti-Hindu, anti-Bengali and anti-India.”

Addressing a huge election rally in New Delhi on Dec. 22, Prime Minister Narendra Modi said the CAA/NRC had nothing to do with Indian Muslims and that “no Indian Muslims will be sent to any detention centers.” The speech was accused of being a “combination of falsehoods and half-truths.” Critics have called the CAA/NRC the “greatest act of social poisoning by a government in independent India,” aimed at making the country a Hindu state and turning a large number of Muslims into stateless subjects.

Zakia Soman, a co-founder of Bharatiya Muslim Mahila Andolan (BMMA), a nationwide rights organization for Muslims, said the “diabolical” developments have led to great apprehension in the Muslim community, which makes up 14.2 percent of the Indian population. Many Muslims have approached BMMA to understand and prepare for the repercussions. The organization has launched posters raising awareness and community meetings in 15 states across the country.

“Since CAA is so discriminatory, it has given way to fear that even if people have their documents in place, they will be left out of NRC. Ordinary people think, and not without substance, that this is an attempt to rob them of their citizenship,” Soman said.

Rais Shaikh, a member of the legislative assembly in the western Indian state of Maharashtra, said the CAA-NRC combination has created panic across the community. “I have had 75-year-old men and women approaching me, asking for help with documents,” he said. “At least 500 people visit my office every day, expressing similar concerns. Most of them are now running around to ready their documents, approaching lawyers and agents. They’re scared of being stripped of their citizenship.”